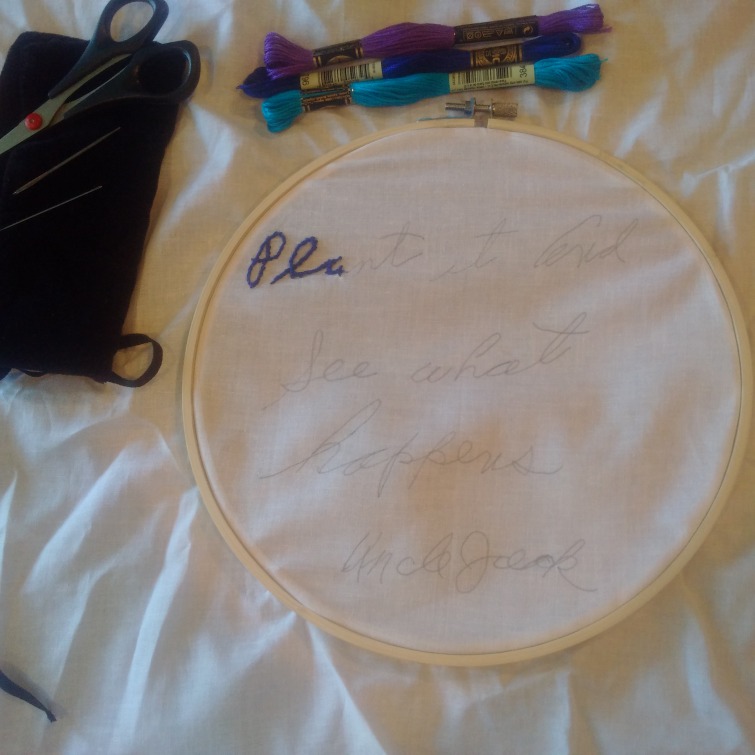 My Uncle Jack lived 97 years. He had all kinds of great sayings. All his nieces and nephews had our favourites. We had some good laughs at his funeral about that.

I’d been thinking about one in particular for a while now: Plant it, and see what happens.

My uncle used to love touring my garden. There was always the same stuff, but he said to me “Are you going to give me a tour of your garden?” We looked at a few kinds of tomatoes that often turned into the Great Tomato Forest when I didn’t take care to stake them as well as they should have been. Swiss chard, some with rainbow stalks, some with red, some with green. Brussels Sprouts and cabbage. Sometimes radicchio or Romaine lettuce. Zucchini. In the herb garden, basil and lemon balm, a few kinds of mint, thyme, chives, oregano, and marjoram. He would smile at the sunflowers. He would touch the tomato  and basil leaves, and bring his the scent to his nose. His mind would wander to gardens past; to his own  gardens of garlic and tomato and basil, and then more recently, to the pots of plants on his patio. On one visit, I had two fig trees, and he wanted one so he took one home with him. I have two again, and the squirrels and I have an uneasy understanding that they should stay away from my figs, and I won’t put a hit out on the lot of them.

One spring, he came for dinner, and I had lentils sprouting on my windowsill, and lemon seeds sprouting in a pot. He laughed and told me about some adventures he had. He planted chick peas one year. He got cotton seeds from somewhere, and decided to plant them. His garden theory was “Plant it, and see what happens”.

I inherited his bay laurel plant when he moved out of his house. I nursed it back  to health. Then I repotted it poorly, and I fear that I have killed off most of the plant again because the root ball was too high in the pot. I have killed many plants (mostly jade, but others too) without remorse, but this one makes me mournful. There are a few new little shoots from the main branch. Come on, little bay laurel! You can do it!

I inherited all his cookbooks, too. There were hundreds of scraps of paper with recipes he wrote down while he was watching the Food Network, stuck into the pages of his favourite cookbooks. I kept some of his handwritten ones, tucked away. I spoke to a friend, and she suggested that I frame a few of them. That wasn’t quite what I wanted to do, but I didn’t know what I wanted to do, either. But in the last few weeks, I figured it out.

I took my Uncle Jack’s handwriting, and scanned it. I found the letters to spell “Plant it and see what happens” and I found one of the last birthday cards he gave me, with his signature of “Uncle Jack”. I made a … well… it kind of looks like a ransom note right now. But the goal is to embroider it, with leaves around the edges. Leaves that he touched in my garden, or grew in his. Fig, tomato, basil, bay laurel, chard, mint.

Child had a picture book, ages ago, that is about a hedgehog that grew a garden because he was an ass and ate everyone else’s gardens the year before. There are margin pictures of sprouted seeds and leaves of all these things. I’mma use that book as my leaf guide, when I get to that part of the project. Looking at that book will be good for me, too, as Child graduates and starts the next phase of his life.

This project is ambitious, since I’ve only ever embroidered a few times. But I need something to be the relief valve when I can’t walk the beach. Something when I’m in the car for hours on the way to Highland festivals and Scottish fairs, or sitting in the shade of my terrace on balmy summer nights.

Becasuse really, on a wider scale, Plant it and See what Happens is good advice. Step out from what you’re used to, and see what great thing might happen.