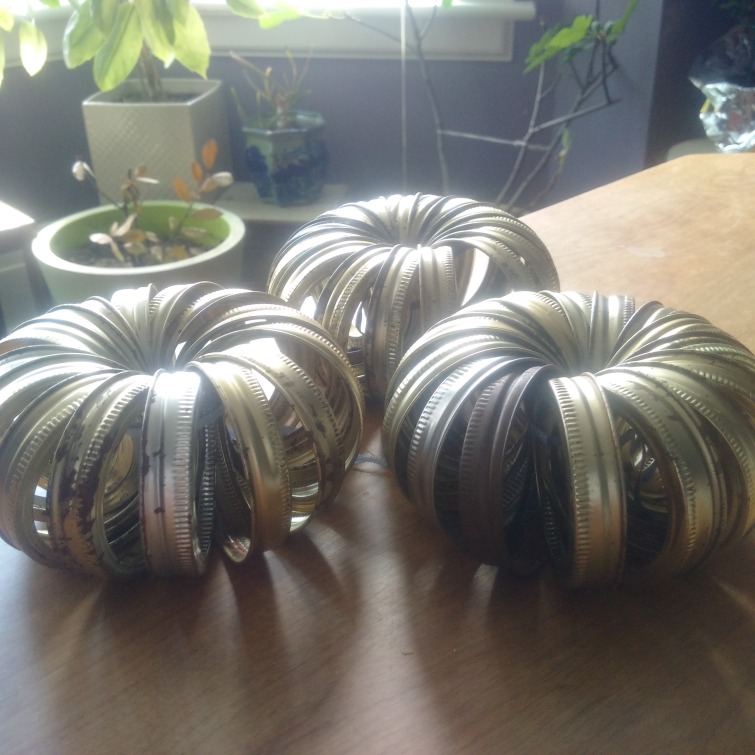 This weekend I bought two half-bushels of tomatoes. I brought up quart bottles from the basement, brought up the skate lace threaded with eleventy thousand rings, and bought two new packages of lids. I was ready to go.

I dumped all the rings off the skate lace and sorted them into piles – too rusted to use, scratched, but still OK for dry goods, and unblemished. Most of the rings fall under the too rusted to use category, but I had a plan. I was going to make pumpkin decorations with them. All I had to do was string a bunch of them onto a string an tie them in a loop to make the ring.

First try: All the rings were facing the same way except for one. When I went to take some off to flip it, I dropped the end of the ribbon, and the rings went everywhere.

Second try: I got them all strung, then went to tie the knot and dropped the end of the ribbon and the rings went everywhere.

Third try: ditto, with a chaser of frustration, and some tier 3 swearwords.

Fourth try: ditto, with a chaser of rage, a walk away from the table, and some tier 2 swearwords. This is when I seriously considered that maybe I didn’t need stupid canning ring pumpkins at all.

Fifth try: I got them strung, got the knot tied, but it was too loose, so I had to untie it, and dropped the end of the ribbon and the rings went everywhere. With a chaser of WhiteHotFury, and All  the tier 1 swearwords.

Around the 6th try, I got it done, but there were two more loops of rings to do.

You can see that eventually I got all three loops tied, and no one died, and I didn’t set my living room on fire when my head exploded. But it did make me think about the tenacity of my effort.

When, in a fruitless effort, is it time to just cut bait and move on? I’ve done it with failed friendships and hateful jobs and my desire to learn how to drive standard or crochet or grow peppers in my garden. What is that final burr under my saddle that makes me say, “Enough”. Or “F@%k you”. Or “Peace out, bitches”.

I employ different strategies for bolstering my continuing: Convincing myself that whatever I’m madmadmad about is being compounded by a perfect storm of sucky circumstances – but it’s not as bad as all that. Or, I convince myself to pick my battles, and this is not the thing I’m going to die in a ditch to defend. Still, I’m shouldering into a few things right now that I’m unsure about where the line is. Until then, Picard, give me strength.