Months ago, my gentleman associate and I went on a Cidery tour of the Golden Horseshoe. We brought home cans of cider and growlers of cider and bottles of cider. And then we drank it all (mostly). Today, we expanded our wanderings to a few breweries and some other fun stops, and we invited Coocoolooloo (my mom) and The Chief (my dad) to come along for good measure. Because day-drinking with your parents is cool, right?

Because there’s some moral guideline that says that you shouldn’t fall face first into a pint glass (in public, anyway) before 11am, our day started at a Polish butcher. My friend Ann’s Babcia sanctioned Viks Meats as *the* place to get kielbasa. Better than the candyasses at Kustra’s (when that was a thing) or Beach Road (*this may or may not be a direct quote. But it could be, you don’t know). In any case, that’s a pretty heavy endorsement, so the first purchase of the day was a link and a half of kielbasa and a half-link of spicy kielbasa. You know, for science.

From Viks, it was a quick jaunt along the winding Hwy 8 at the base of the Niagara Escarpment for a few minutes until we got to Bench Brewing Company. They took an old schoolhouse and made it into a lovely brewhouse, tap room, and restaurant.

The 4 of us got 3 flights of beer, and we didn’t come close to hitting all the offerings. But lo, it was at Bench that the Thanksgiving Miracle happened. I bought a 2 pint mega-can of beer that I actually enjoyed: Plum Grove. It’s an amazing time to be alive. Good on you, Bench, you succeeded where so many others failed. 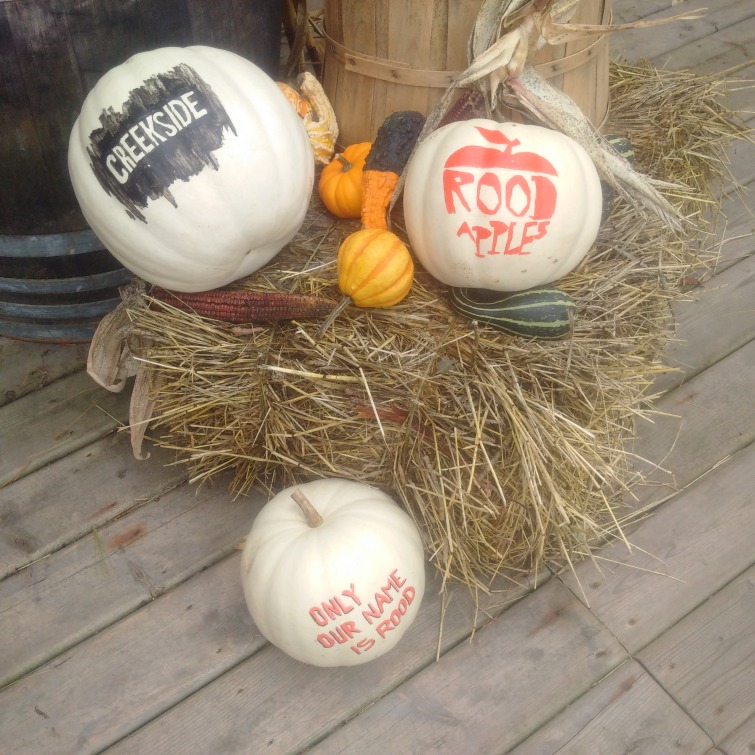 The next stop was Creekside Winery, which also makes Rood cider. The happy surprise here was that there is a deck called The Smoke Cookery overlooking the vinyard and the barn full of barrels for the wine or cider. Their menu has southern barbeque without the over-saucy thing that I don’t enjoy about most barbecue. All the meat was smoked and the scent of the woodsmoke lingered in the air without being obnoxious. It was an excellent fall repast. I had a pint of the cider with my lunch, but didn’t bring any home. Mostly because I knew the next stop was…

This was a tactical strike. We bought a growler of cider aged in whisky barrels on our first visit during the summer. We bought 3 growlers today.  The rest of the day was built around our neeee-eeeed for more of their Bootleg cider.

And, the have a bunch of snarky signs around their patio. These are my people.

Next, we visited Oust Brewing Company. I was thinking my dad would like it here because they have a bunch of dark beers. And a Watermelon thing. And a Sweet and Sour. These latter two are less about my dad than about the interesting things that these small batch breweries are doing. So interesting. Full disclosure, I don’t like beer (except for my Plum Grove from Bench), so I didn’t try anything here, but it was pretty busy whilst we were there, so that’s a good sign for their appeal, right?

Right down the street was Silversmith Brewing Company. They have a Black Lager that has won a bunch of awards, so we got a flight. One of their guest taps right now is Smoky and the Bandit, in which they smoke the hops before adding them to the brew. This brewery’s restaurant and tap room is in a decommissioned church and it is a really beautiful space. They’ve preserved the Rose Window, and use it in their branding (and on their merchandise). That’s a nice touch.

Last, we went to the Niagara Teaching College. We went to their beer tasting room and store, and we tried a Cherry Saison. My mom was a fan. As it so happens, their greenhouse and horticulture store was right next door to the tasting room, so we walked through the huge vibrantly coloured chrysanthemums and perused their herbs to put in a winter window garden. In semi-related news, they will be selling student-grown poinsettias at the end of November. All the proceeds from the wine and cider, spirits, beer, and greenhouse stores goes right back into the programs, which is an even better perk to the great products they provide.

I grew up on the Niagara side of Hamilton, on the eastern edge of Stoney Creek, and while you know that the region is full of great produce and the peaches are unmatched and cherries and so many vineyards and wow pumpkins and manymany orchards… but somehow, until you wander through there, you forget how bountiful and beautiful your backyard is.

On the cusp of Thanksgiving weekend, that seems like a pretty splendid takeaway.