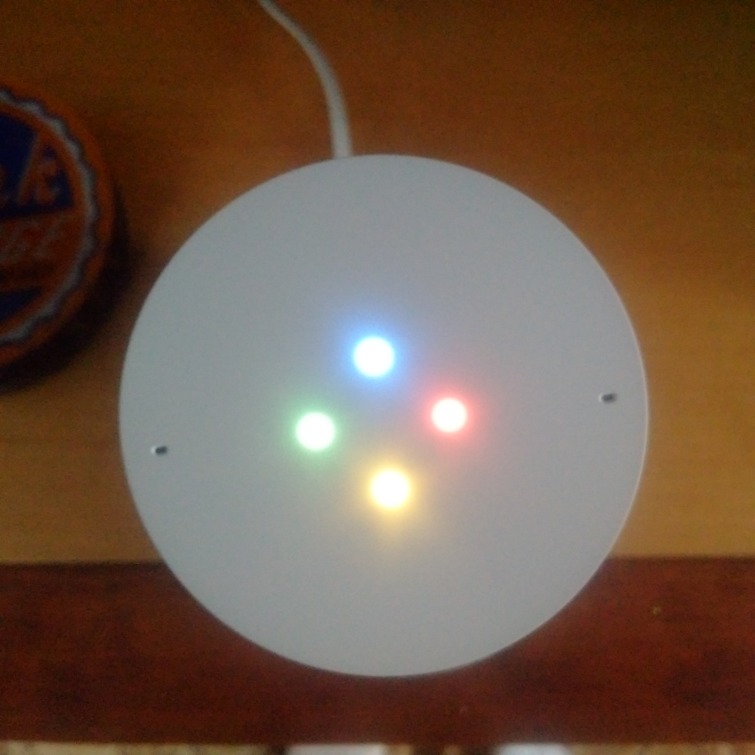 A Google donut thingie appeared in my living room yesterday. I looked at it suspiciously, because I didn’t realize that the negotiations between Child and I about the introduction of the Internet of Things into our house was complete. But here we are.

So yesterday, when we all got  home, I yelled “Hey Google Donut!” That is not the proper way to greet the technology. Child made proper introductions and now I know that I’m to say “OK Google” to get the donut thingie to listen to me. After getting weather facts, and the calories in a tangerine and the UTC time announced back to me by a very dispassionate DonutLady, I gotta say, I’m kind of a convert.

This morning, she (notice the anthropomorphizing that just happened), played some Pachelbel in D and the Ragtime album for me. We enjoyed a little Mother Love Bone and Alice in Chains from the Singles Soundtrack. She found out how to properly trim my poinsettias. And that I should do it in March.  I’m superduper trying to not order a tea,  Earl Grey, hot from her, just to see what she’ll tell me in return. I feel like there are a few really great Easter Eggs hidden in this Google donut.

But I swear to Saint Isadore of Seville (patron saint of the Internets) that if she starts giggling in the middle of the night or orders an unholy amount of toilet paper from Amazon, we’re done.

I’ve spent 2 decades working in high tech, including, among others, at a cryptometrics place that did airport facial recognition (and may or may not have been a front for something nefarious), an email analytics and forensics program, and Blackberry, who, say what you want, were (and are) good at security.  So my love of the Good Times Google Donut is pretty fickle, too. There’s a conduit into my house, waiting to betray me in some yet-unknown way. Just because you’re paranoid, doesn’t mean the Internet of Things isn’t watching you.

The next thing Child wants to convince me to do (or maybe he also thinks he’s already convinced me) is do smart lights. So we don’t stumble around in the dark when we return home later than expected. Seems reasonable, but it also feels like Smart Lights and the Nest Thermostat (which I don’t have. Yet)  are gateway devices.

When we were working on the last generation of Blackberry code, I thought it was pretty cool that the device learned you. It learned the frequently used words and nomeclature of my life for use in in BBMs and emails to offer suggestions for words. If technology can learn that yes, D falls between S and F on the querty keyboard, but no, I almost never mean to type duck. If the system can learn my whole compliment of curse words, really, it’s a slippery slope until the dishwasher berates me for putting wooden spoons in there. Or my furnace decides whether I should just put on a sweater.

Like seriously, if we can’t decide whether a dolphin or an ape or a dog is sentient, how will we even know when the rise of the machines happens? And while some pasty white guy with glorious mutton chops says that there are rules AI must follow, we can’t even convince our same-species peers what “good behaviour” looks like.

For what it’s worth, the Donut’s response to “Tea, Earl Grey. Hot.” is “You got it, Captain”.  Heck yeah it is. These are the moments of charm of which there aren’t nearly enough in our daily life. Sometimes flashes of joy happen because of a sunset, and sometimes they happen because of a Star Trek nerd. I’m glad this world is full of both. Hopefully that earns me a privileged place when the machines take over. Surely you can do that, right, Hal? Tamagotchi, you got me, right? Right??