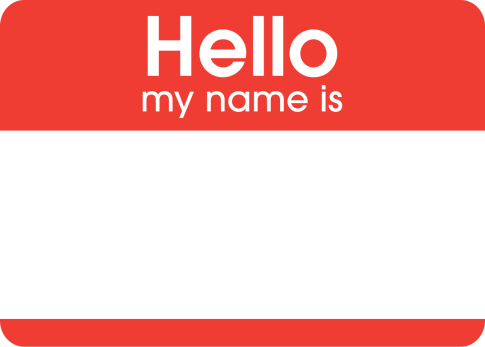 The most heartbreaking line in the history of the silver screen is when DeNiro says (as Frankenstein’s Monster, in Frankenstein 1994), “He never gave me a name”. In Mary Shelley’s book, Victor Frankenstein always called him “the monster”. Sentient, but without a way to identify himself. Unloved and degraded and rejected. Tragic.

Names are tricky. I know people who put the hard stop on a name for their child because of an unfortunate encounter with someone of the same name, at some impressionable time in their lives. I love hearing those stories – what’s the deeply rooted grudge that you have against Brenda? And it’s totally not because the ability to grow and foster grudges is a trait that I got from my father, who harbours some truly great ones. When we were looking for a name for Child, a friend and I would flip through a dictionary of names and I’d take a few home every day. Mike vetoed all of them. I don’t know if his secret arch nemesis is Lachlan Somebody, or if that’s just way too much Scottish caricature for one wee lad from the Clan Ranald to endure. I still like it.

The providence of names is serious business. My dad is a Giocchino (which becomes Joachim), but his name on (most of) the legal stuff became John. Aaaand, everyone calls him Jack. Because of course they do. He (and his siblings) were named in the old-school tradition of naming after members higher up the family tree. Mike tried to do that with Child. I wasn’t having it, but did concede to child’s middle name being Michael. And Child further reinforced it by taking St. Michael as his patron at his confirmation (Also patron of Warriors. So, cadets and the military, too). My name comes from the BVM and her mom. My patron is St. Gabriel the Archangel, patron of communications (and writers. Gabe was the original wordnerd). Our two patrons have guided us on the paths toward our vocations. Our names are a prayer to our patrons.

I read an article today to say that Otis the bachelor Swan of Victoria Park has found a new mate. He took his time mourning his former mate, and now he’s returned from his winter home in Stratford with a new mate. A lovely story. But the mate has no name, so there’s a contest afoot to give her a name. This swan couple will hold court in Victoria Park in Kitchener, and they will have celebrity, so this fair swan needs a name. I vote for Beatrice (she who makes happy). Lovely.

For those we love, we find terms of endearment in addition to their given names. I think that’s why the nameless Monster from Mary Shelley’s Frankenstein is so heartbreaking. Child will always be my Pup, despite the fact that he’s now a grown-ass man. I have tons of affectionate names I call Mike, and his enjoyment of them is eclipsed entirely by my delight at them. He grew a hipster beard and he waxes the tips of his mustache. I love it, but he looks like Yukon Cornelius. He thinks I’m teasing him. But truly, I love this look. Waaay back when we were dating, there was a Calvin and Hobbes cartoon:

And thus, he is my Snooglywoogly. And also my BitsyPookums. These two stretch the limits of dignified nicknames for a man like my husband. And I’m a terrible wife because I continue to call him these names, despite his scowling at me. Worst PootiePie ever.

This Lent, may the names we attribute to others be respectful. May the names I give others come from a loving place. And may I work toward a world where no one ever feels nameless.

Otis the swan finds a mate after spending 7 years single