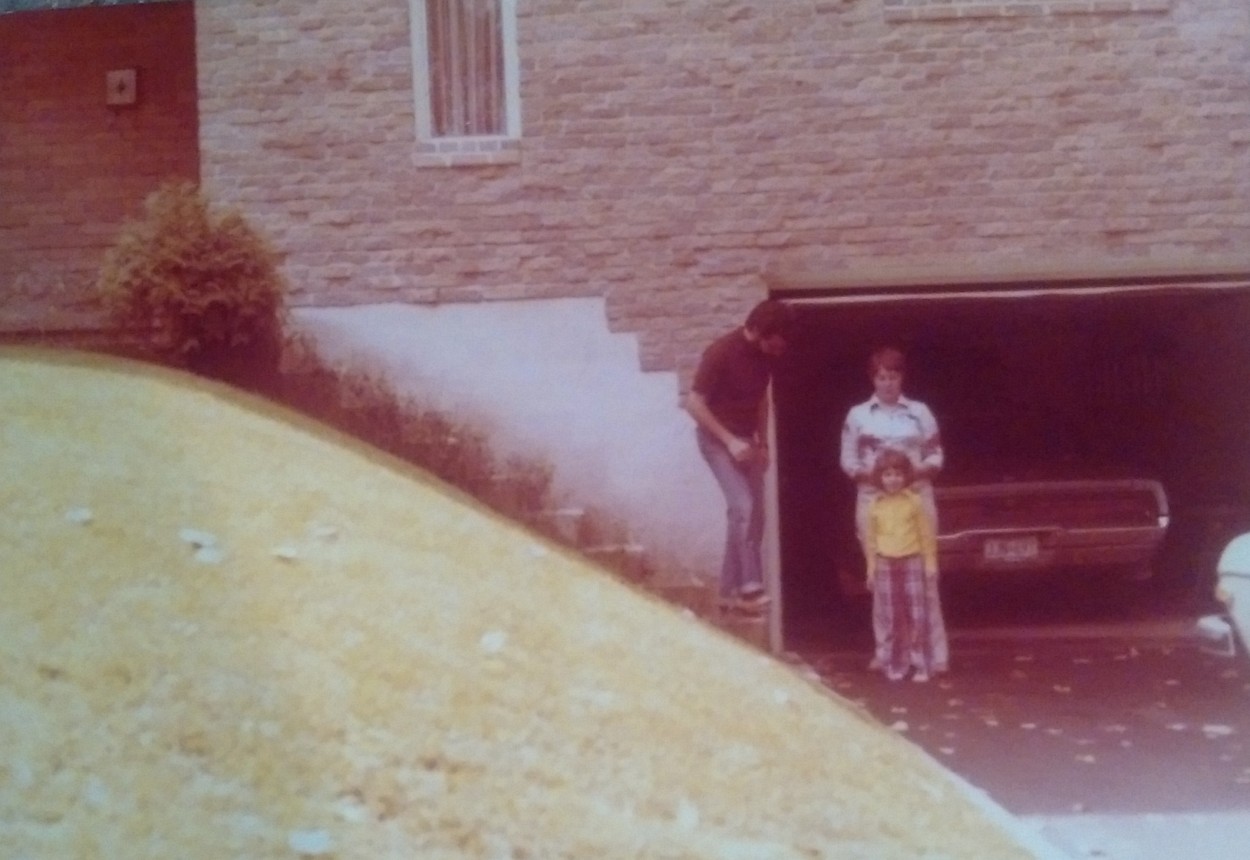 When I was maybe 5 or 6, the house where we lived had a hallway that lead to a tall, narrow window that overlooked our driveway. Every day, I would haul ass down that hallway to see my dad pulling into the driveway. I’d slide on sock feet, putting my hands up on the glass to stop myself. One day, the glass didn’t stop me, and the window shattered. I scared myself, so I scurried behind the leather recliner in our living room to hide. You know, as one does after one punches through a windowpane.

My mom came running into the hallway, saw the broken glass and not me, and thought I went right through (which would have meant a 6 foot drop to the stone staircase below). I can imagine the panic she felt looking down the hallway at the scene. She suggested that perhaps I shouldn’t haul ass down the hallway anymore. She didn’t tell me to not slide into the back door, though, so I eventually put my hand through the glass of the storm door there, too. I have a scar on my thumb from the ordeal, and a certificate in Level 2 Saloon Fighting.

Some lessons take a few tries to stick.

When Connor was maybe 5 or 6, we went to a park with a friend of mine who was childless by choice. I gave Connor a perimeter where he was allowed to run, and in the fun of the game, he overran it. Not by much, but he still was outside the established perimeter. I didn’t say anything or call him back. My friend asked how I decided how far away was far enough, and why I didn’t pull him back within the boundary. I said that it was a balance between the risk of what could happen if I let him overshoot, and the benefit of letting him figure out his own comfort with being on his own. I would rather he was secure in his adventurousness, but still in a proximity that I could help him if he, say, fell out of a tree, or fell in a hole or slipped on the rocks at the edge of the (slowly meandering) river, and he needed help. I could have panicked all the time that he wasn’t within an arm’s length of me, or I could let him figure things out from a safe distance.

Looking back, he got stuck in a tree, convinced he couldn’t climb down, but he never fell out of one. He learned how to get himself out of the holes, and he picked himself up when he slipped on the rocks.

That winter, while we were all out cleaning up after record snowfall, somehow, Connor wandered off. The sun was setting and I went in to make dinner. When supper was ready, Mike came in, but Connor didn’t. He was out in the dark. The snow was deeper than he was tall and the drifts were at least twice that. There was enough wind that there were no  footprints for us to track. He could have been anywhere. He could have fallen through the crusted snow surface anywhere and been injured or unable to get himself out. An hour later, we found him, 2 fields over and 2 fields back. He got turned around in a stand of pine trees, and couldn’t find his way out. As it got darker out, he got more frightened, and he learned a lesson about going too far beyond the comfort zone. Some lessons stick on the first go.

In the time since then, he’s spent two, then three, then six weeks at cadet training camps, and two weeks on a canoe expedition in Algonquin Park. He never called me or texted me during the time he was away. Some cadet parents don’t feel safe if they don’t hear from their kids every few days. Same rationale applies for me as in the park a decade ago. He’s with people at camp that can help him if he falls out of a tree or falls in a hole or overturns a canoe in a more rapidly moving river, or gets turned around in a stand of pine trees. If he has a need that they can’t cover, he would call me. But we’ve given him confidence to find his own boundaries and feel secure in them, so he doesn’t need to call me just to check in.

He’s spent 2 weeks in Switzerland last summer, and is spending 2 weeks in London/Paris/Berlin and then 5 weeks in Scotland this summer. I don’t expect to hear from him then, either, because he’s got a group of friends and bandmates who will help him with the things he needs help with. But if there’s something, he’ll call.

We gave him space and time to develop his wings, and now, we get to watch him fly. He swoops back to us when he feels unsure, and then he takes these strong beats to catch the next draft to take him to great new adventures.

I’m not afraid of him slipping on the rocks or getting pitched into dangerous waters. He still feels anxious before a new experience, which tells me that he hasn’t figured out his safe boundary. But then, he heads off into that experience without looking back, which tells me that he’s confident in his ability to find the balance of risk and adventure.

I have stopped putting my hands though panes of glass, and in all of Connor’s adventures and expeditions, he hasn’t wandered off beyond his ability to find his way back. We’ve moved on, and now there are other lessons for us both to learn.